The Origin: The name Drei Mohren

An old legend tells of four Abyssinian Monks, who long ago were guests of Innkeeper Konrad Minner:
At this point in time, the Inn was diagonally opposite to where it stands today.
The harsh cold of winter forced the traveling Moors to hastily retreat to whence they came, where along the way, on the outskirts of Augsburg, one of the men surrendered his life to the merciless conditions.
Innkeeper Minner brought the three surviviors back to his inn and aided in their recovery through the remainder of winter.
Before their departure the following spring, the three were immortalized in a blackboard sketch that then became the Inn´s sign. The three terracotta busts hanging in our lobby today, are the original creations by sculptor Ehrgott Bernhard.

The Inn: A Prince´s Hostel?

Landlord Andreas Wahl bought an old estate across from the ´Zu den Drei Mohren`Inn:
this corresponds to our actual location today. Here is where Andreas Wahl commissioned the construction of an expensive new Inn, which would later gain notoriety in earning the epithet ´Prince Hostel`. (Fürstenherberge)
The Inn grew into one of the best hotels in Europe and gave lodging to all levels of royalty and other prominent guests of that time. Some of these guests include:
Friedrich Wilhelm I. von Preußen – 1730
Giacomo Casanova – 1756
Wolfgang Amadeus Mozart – 1763
Johann Wolfgang von Goethe – 1790

In 1874, Hotel Drei Mohren went public and was converted into a stock company. Subsequent construction resulted in the creation of the `Palmengarten`, which today is the Teehalle.
In 1878, the Riedinger family undertook the responsibilty of running the hotel. The installation of one the first Diesel motors in the world in 1898, to provide electricity for the hotel, was just a precursor to the complete renovation and restoration of the hotel in 1915: upgrades included an expansion to 90 rooms with inreases of space in both the Dining and Social rooms. Horse stalls and carriage sheds were remodeled to house automobiles.

Drei Mohren during the Economic Crisis

On the February 27th, through a joint-stock company venture, Drei Mohren regianed self ownership as a private limited company.
The US Stock Market Crash of October 24,1929, and the decade-long economic/financial chaos that it caused, also impacted Augsburg´s textile and engineering industries. The resulting mass unemployment, from which the hotel was not spared, meant that by the summer of 1932, the hotel was facing certain ruin.

Late into the night of February 25th 1944, the hotel was heavily bombarded during an air raid known afterward as the `Augsburger Bombennacht`, burning to the ground within two days. The entirety of the lavish and expensive furnishings were destroyed, except for a few paintings and rugs which were safeguarded before the attack.

The hotel was completely rebuilt on its old foundation: This undertaking is also the origin point of the Teehalles current layout; and what was formerly known as the Café/ Bistro is now maxilian°s.
The Hotel Drei Mohren was officially reopened on May 26th, 1956.

On June 11th, 1979, Egon Steigenberger´s company, A. Steigenberger Hotelgesellschaft KG aA Frankfurt, assumed management of the hotel, whereby
Mr. Steigenberger was also elected to sit as a Drei Mohren board member. In the years to follow, the hotel found success in continuing to establish itself as a conference hotel, hosting several high level conferences within its walls. 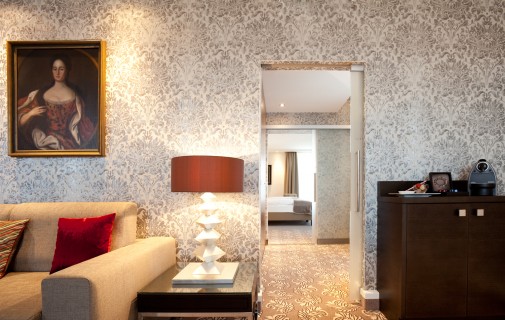 On April 10th 2011, the hotel was closed down for nearly a year so that an extensive restoration could take place with two points of focus in mind: Modernize while preserving the rich history and tradition. Examples of this are found in the Teehalle, which remains to this day, the centerpiece of the hotel. It was refitted with a glass dome replica of Augsburgs´ Coat of Arms: The Pine Nut. The beautiful mosaic floor laid in 1956, leading into the Teehalle, was once again uncovered to grace the hotel lobby. A sizable art collection was also restored and integrated into the the overall concept that is experienced today. On January 1st 2013, a franchise agreement between Drei Mohren AG and Steigenberger Hotels was signed, merging the two into Steigenberger Hotel Drei Mohren.

Steigenberger Drei Mohren steps away from the public trading domain, converting into a Limited company. Hotel Manager and Executive Director is Theodor Gandenheimer. His guidance has resulted in the development of new concepts for maximilian°s and Bar 3M, as well as the hotel´s 132nd room: Suite 500.

In February 2019, the Sartory Gourmet Restaurant was awarded its' first Michelin Star rating under the direction of Head Chef Simon Lang.

Since January 01,2020, the hotel does not work in association with the Steigenberger Hotel Chain any more, opting to establish itself as an independent private hotel and member of the reknowned American marketing co-op: Preferred Hotels and Resorts. 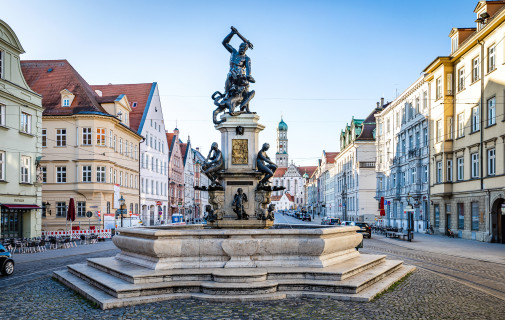 Due to social changes the hotel name is changed from Drei Mohren Hotel to Hotel Maximilian's on November 03, 2020
The contemporary name should reach guests from all over the world and all cultures. The eponym Emperor Maximilian I. (1459 – 1519) had an outstanding importance for Augsburgs great history. Besides that, the central location of the hotel on the Maximilianstrasse, Augsburgs historic boulevard, fits perfect. 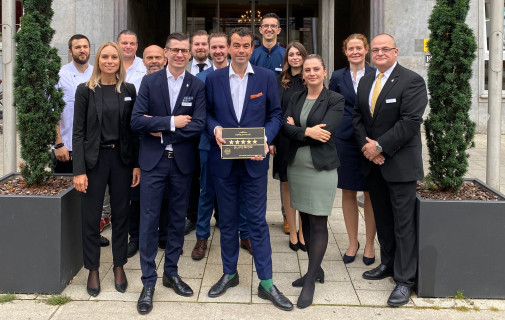 The Hotel Maximilian's has been awarded the highest official hotel classification of 5-Star Superior. As one of 73 hotels in Germany and one of 11 hotels in Bavaria, it belongs to a very exclusive circle of the best hotels in Germany. For the 300th anniversary in 2022, the team around Theodor Gandenheimer has set itself the goal of being among the best hotels in Germany. The lockdown period was used to carry out renovation measures, further expand digitalisation and once again improve the already very high service standards.